You are not connected. Please login or register
MAY YOUR LIFE BE FILLED WITH JOY WHILE WE WAIT
The site is set up for news and a place to keep informed on the IQD. ..... Thanks go out to www.TruthCall.com/chat for their support in this website

we recently were blessed with a new source of information or contact if you will…an educated Kurdish gentleman, with medical training and a translator…I asked for permission to interview him regarding his opinions about currency and politics…this was my first encounter with him...

Q)  Do you believe the IQD will revalue and will there be a new currency with dropping off of zeros...when do you expect this to take place? (I had to explain this question and re-ask it in various ways because he didn’t seem to grasp the notion of revaluation of the IQD, which seemed to be a foreign concept to him...nor did he understand my interest in the IQD even after I discussed this at length and tried to explain this more fully from an investment standpoint...)

A)  “I don’t understand”, but then asked me if I had the new dinar (post-Saddam) and then explained “it probably will not happen as you see it...maybe in Iraq” and seemed puzzled about why as an American I would purchase IQD…he explained that at least in Kurdistan, where he is from, there is no daily talk about the IQD as such, revaluing the IQD or deleting zeros…the USD is easier to use and worth more than the dinar.

Q) I pressed further and asked why he felt this way?

A) His response was essentially because Iraq is not a safe place for these kind of things.

A)  Will Kurdistan separate (cecede) from Iraq?

Q)  He essentially says Kurdistan is already its own government and we have our own leaders.

Q)  Who will win the election...does it matter?

He appreciated talking with me and thanked me for my interest in Kurdistan and says, “call me anytime buddy."
...There were clearly some cross-cultural and language nuances, perhaps lost in translation and I was a little puzzled with his responses, but plan on more of a sit-down over tea session next time to discuss this further, go over some articles with him etc., as the opportunity presents itself...
goodyboy

comment : this is just round one of investigating this gentleman's perspective...he is a very smart man and comes across as well-connected and well-informed...
...but there clearly was a disconnect between his grassroots frame of reference and that of the lofty posturing we often see in posted articles from Iraqi economic "experts" and analysts supposedly in the know, pontificating about the future value of their dear dinar...

Q) from one of our investment group members:  "Thanks for all your efforts goodyboy!  I wonder if your questions will prompt him to ask a few of his own? Could be a more interesting conversation next time you talk to him!

A) I hadn't thought about that...
...I also wondered if Kurdistan may be too far removed from the hub of economic rhetoric in Baghdad, although he seemed to know all about the SLC and parliamentary politics...
......as I mentioned last Sunday, we'll see, as I intend to explore this more fully...
goodyboy 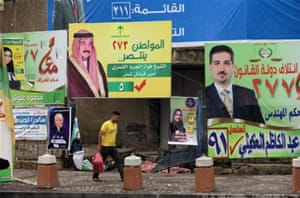 
Like most Kurdish men, 35-year-old Salih Mustafa served in the Peshmerga, the Kurdish fighting force, during the struggle against former Iraqi President Saddam Hussein's regime. Since then, he says, not much has changed.

"I have talked to many Arabs who have come here from Baghdad, and they have told me that when Saddam left Iraq, hundreds of Saddams replaced him," resident Abdullah Aziz agreed, to a wave of approving nods from a group of men.

As the countdown continues to Iraq’s general elections, scheduled for April 30, Kurdish voters appear largely pessimistic that the forthcoming vote will change the status quo. Many argue the disconnect that characterised the relationship between the central government in Baghdad and the Kurds under Saddam’s rule is still felt in the streets of Erbil today.

"Kurds feel the constitution has not been implemented, their identity has not been recognised and the characteristics of the region [have] not been taken into consideration," the head of Kurdistan’s Department of Foreign Relations, Falah Mustafa, told Al Jazeera.

Salih Mustafa plans to vote for the Kurdish Democratic Party (KDP), one of four Kurdish parties contesting this year’s elections. Senior party officials estimate the KDP will receive more than one million votes, an increase from the 925,000 it gained in 2010.

If this occurs, it would likely place the KDP first among the other Kurdish political forces. KDP statistics predict that its rival group, the Patriotic Union of Kurdistan (PUK), led by Iraqi President Jalal Talabani, will secure around 600,000 votes, while Gorran (Kurdish Change Movement) will get 550,000 and the Islamic Union of Kurdistan 185,000. The PUK has stated publicly that it anticipates receiving more than 600,000 votes, while Gorran has not released predictions.

Unlike in previous elections, the PUK and the KDP will run as separate entities rather that on a joint slate, as the two parties have been locked in a complex political feud. The KDP has taken control of the Peshmerga and the interior ministry, a move viewed as a blow to PUK domination.

Despite these divisions, Kurdish parties are united over a range of other issues, including relations with the federal government, oil exportation, a more equal distribution of the federal budget, and Article 140 of Iraq's constitution, which calls to scrap Saddam Hussein’s Arabisation process in Kirkuk.

Kurdish forces also maintain a united front against the re-election of Prime Minister Nouri al-Maliki, whose State of Law coalition is widely expected to emerge victorious in the forthcoming elections due to the absence of a united opposition. Al-Maliki’s two major rival blocs are undergoing transformation: the leader of the Sadrists bloc, Muqtada al-Sadr, retired from politics in February while Iyad Allawi’s al-Iraqiya bloc has been fractured.

The Iraqi premier may seek to win Arab votes by playing on the dispute between the federal government and the Kurdistan Region Government (KRG), said Wladimir van Wilgenburg, a Middle East analyst at the Jamestown Foundation: "It is a strategy to get votes from the Arab population by saying that the KRG wants to prevent Iraq from being strong. It’s a long-time strategy of Maliki’s."

The KRG employed similarly dubious methods ahead of elections. On April 6, in an interview with the London-based al-Hayat newspaper, KRG President Masoud Barzani likened Baghdad’s decision to block Erbil’s share of the annual budget to that of Saddam’s 1988 chemical attack on Halabja that left 5,000 dead.

If al-Maliki were to remain in power, tensions between Baghdad and the KRG would likely grow. Barzani recently threatened in a television interview that "now is the best moment to declare independence", but sceptical Kurds have suggested this is merely a campaigning strategy.

"This card has been played at least a couple of times in the last few years, all during election campaigning periods. Usually right after the elections the call is dropped and no-one brings up independence," said Meer Ako Ali, a journalist from Sulaymaniyah.

Kurdish journalist Kamal Chomani echoed that view: "Barzani’s call for independence is a campaigning tool… independence discourse should not be reactionary, it should be strategic."

While most Kurdish citizens have a strong opinion on Baghdad, they have also distanced themselves from a reality that is no longer their own. Their government appears to be heading down the same road. "When Kurds don’t feel that they are partners in the decision-making process, when they don’t feel that they have a share in that power-sharing system, what else would connect the Kurds to Baghdad?" asked Falah Mustafa.

"I don’t believe in elections in Iraq, in the Kurdistan Region or even in the Middle East because there is no democracy," said 37-year-old shoe shop owner Shamsaddin.